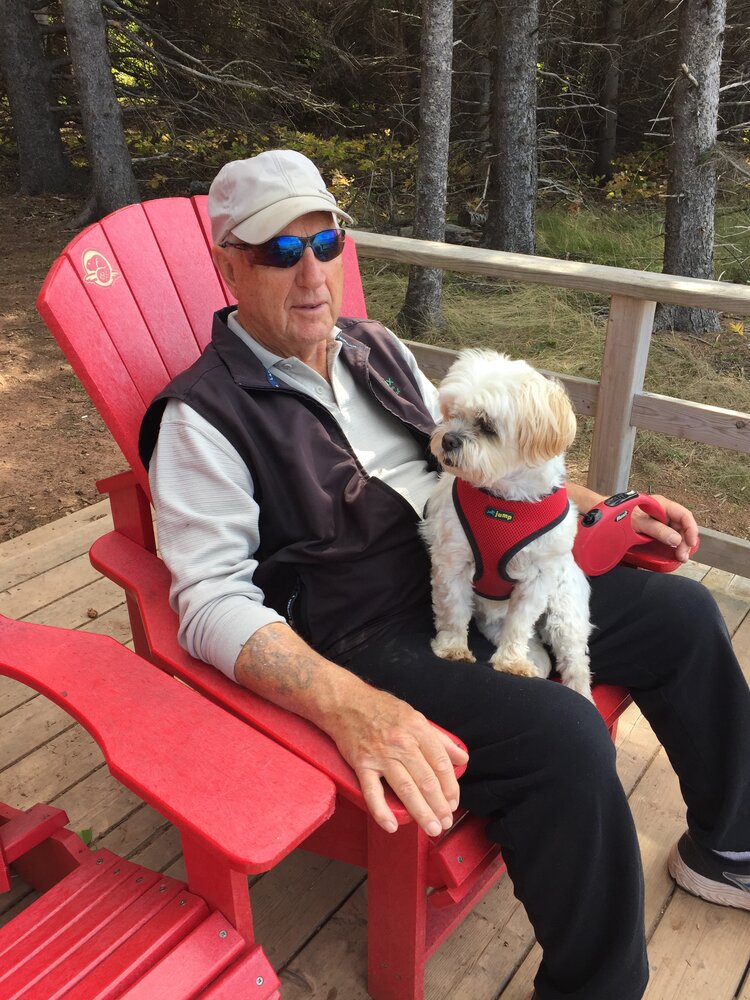 It is with heavy hearts that we announce the passing of a wonderful husband and father, and a friend to many. Peter passed away peacefully at home in Stratford, PEI on October 12th, after a brief illness, with Joan and Zoey by his side.

Peter is survived by his wife Joan and his daughter Tracey (Chris), his loving dog Zoey, sisters-in-law Siony and Joyce (Jim), and goddaughters Christine and Alana (Dan), his cousin Edna, as well as many nephews and nieces whom he loved dearly. He is predeceased by his parents Willian and Lily Young (Ellis), and siblings Bill (Pat), John (Lil), Tony, and Joan Pearl (Jack)

Peter was born in London, England and recalls spending many nights under the stairs as a child during World War II, or going to school with his gas mask kit, and then later as part of Operation Pied Piper, being evacuated to the English countryside with millions of other children, with name tags around their necks for identification and their emergency kits slung over their backs.

Peter served in the RAF, and is a veteran of the Korean War. In 1960 he joined the London Metropolitan Police, stationed at Paddington Green Station as a London Bobby. He then immigrated to Canada in 1966, where he first worked as an Air Frame Mechanic at Bombardier. and then later as an Operator for the Toronto Transit Commission for 29 years. He always had a love for planes and trains.

Peter and Joan married in Toronto in May 1984, and then retired to Norwood, Ontario in 1998. In 2004 they moved to Murray Harbour, PEI, and then later on to Stratford in 2019. Wherever he went, he touched the hearts of many with his kindness and dry sense of humour. He was always there to lend a hand to anyone who needed it.

He loved animals, and you could always find Zoey by this side. The two of them enjoyed daily long walks together. He was an avid cyclist, and up until last year, he would venture out and bike the number of kilometres of his age. His other passion was Soccer. He was a Tottenham supporter from afar.

On behalf of Peter, Tracey and I would like to express our heartfelt thanks to Dr. Alex McKinnon, Dr Nicolas Mooney, and the INR nurses from the Montague Health Centre and the Kings County Memorial Hospital, for your compassion and kindness. And in Peter’s final days, our deepest thanks go out to Dr Janet Baker, of Palliative Care in Charlottetown, to Kim MacMillan from the Health PEI Home Care Office in Charlottetown, to Mary McBride from Kings County Ambulatory Care, and our very special thanks to Alice MacLeod, our friend and neighbour, who has been with us every step of the way on Peter’s journey, since September 21st. Alice, there are no words to express our thanks to you, for all the care and comfort you gave to Peter, and to me; your compassion and commitment is next to none. We would not have been able to get through this without you. Because of you, Peter was able to be comfortable and remain at home, until his journey came to an end. I am not surprised that on his final day Peter asked you if you were divorced yet, so we also thank you Malcolm, for sharing your Alice with us. Through all this, Peter never lost his sense of humour. Thank you all for allowing Peter to slip away so peacefully, and on his own terms.

We would also like to thank our families and friends from near and far, for all the love and support during this time. And to our community here in Southside Greens, we can’t thank you enough for all that you have done for us, you most certainly are our PEI Family. From walking Zoey to taking Zoey into your homes, I can’t tell you how much this meant to Peter and I; and for all the drop-offs of food, groceries, supplies, medicines and for just being there for us over the last 6 weeks, and for still being there for me. There are no words to express our thanks to all of you for your kindness, and for just being here for us.

And to my darling Peter, thank you from the bottom of my heart for sharing your life with me, for always taking care of me, helping and encouraging me to reach my goals, and for always having my back. I miss you terribly and find it so terribly hard to not have you by my side, but you still live in my heart and you always will. You were my soul mate and best friend, and always will be.

Peter is now resting at the Hillsboro Funeral Home, Stratford, PE. As per Peter’s wishes, there will be no visitation or funeral service. Memorial donations may be made to the Provincial Palliative Care Centre, Elder Dog Canada, or Fox Aid PEI.

Share Your Memory of
Peter
Upload Your Memory View All Memories
Be the first to upload a memory!
Share A Memory