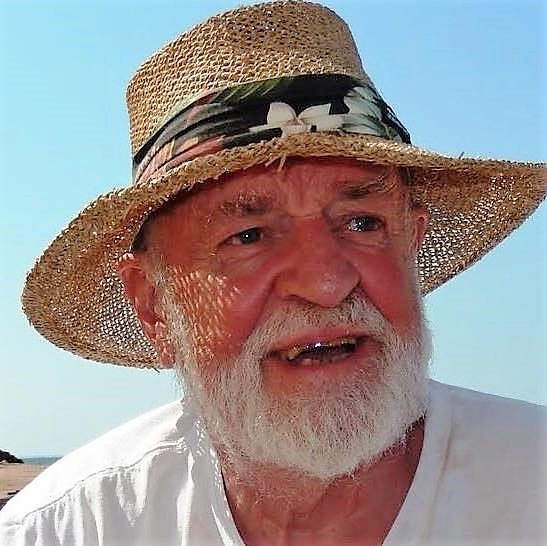 Michael “Mike” Lawrence Chapman started his life in a small flint cottage in a small village outside of Cambridge with his mother Joy and brothers John and Clive, where he helped his Uncle Joe with the game management on the local estate  Among other things, he used to rustle pheasants out of the brush on hunting days.  It was here that Mike learned the value of hard work but also, and more importantly, the value of staying connected to the land, to the great outdoors.  Mike became an electronic technician through the local college and used that training to bring his young family, his daughter Sally, step-sons Nick and Pete, to Canada, to start a new life in Montreal.

Mike eventually met his true love, Carole, in Montreal during a service at the Unitarian Church, a community to which both Mike and Carol were deeply committed.  So much so, that they established the first Unitarian congregation on P.E.I.  Carole brought along with her three sons, David, Chris, and Stuart, who became Mike’s step-sons (a term the Chapman-Maddocks’ disliked because Mike was anything but a “step” father).  It was Mike who taught all of us that family is about love and compassion.  Mike taught us that where love is, so too is family.

Mike eventually brought his family to PEI, to start a new life as an educator at Holland College, teaching computers and microprocessors.  He excelled as an instructor, in no small part because of his commitment to helping his students become the best they could be.  He gave so many young people the tools to start a great life; not only the knowledge of a good trade, but also the confidence to go out in the world and pursue their dreams.  Long after Mike had stopped teaching, he still had students drop in to see him or write to him.

Mike eventually went into the administration at Holland College, rising to the position of Dean of Technology, a title that used to bemuse him, being all official and all.  He was humble.  He was also exceedingly proud of his involvement with Holland College and its truly innovative approach to education.  Mike spread the DACUM gospel far and wide, going to places like Saudi Arabia to help them set up a similar system.  His pride in his involvement with Holland College extended beyond his time actually working there; Mike was instrumental in establishing, promoting, and recruiting for ASHCOR, the Holland College retiree organization

Those who knew Mike know that he lived his life with his heart wide open.  His capacity for love, compassion, and his willingness to help, were inexhaustible.  I think Mike’s huge heart and willingness to create community are why he thrived on his beloved PEI.  Nothing gave Mike more satisfaction than helping others achieve the potential he saw in them, from students and fellow administrators to his family: his daughter and sons, his beloved grandkids Stuart, Kathleen, Isaac, Lewis, Randall, Elizabeth, Trevor, Carter, Emily and James and his daughters-in-law Rose, Nancy, and Kerry.  His grandkids loved Mike’s big hugs and his even bigger heart.  When Mike was asked to point to the marker he thought best indicated his incredibly successful life, he replied without hesitation “I helped a lot of people”.  Amen to that Mr. Mikey.

Mike had one wish that was communicated late in his illness and that was to make sure that people not forget his true love, Carole.  Mike was her primary care giver and now, since he is gone, she will spend her time in an extended care home and her sons will not be able to visit her during these difficult times.  If you knew Mike, or Carole, pay her a visit.  If you do that, I can assure you that you will be communing with Mike as much as you are visiting with Carole.  There is another ways to commune with Mike if you are not able to make it in to see Carole.  On the days you wake up and you are able to say “I will help somebody today” you will carry with you a piece of Mike Chapman in your heart.

Resting at the Hillsboro Funeral Home, Stratford.  Due to Covid-19 restrictions, a private family celebration of Mike’s life will take place at a later date.  The members of ASHCOR may also be planning a post-COVID celebration of life.

Memorial donations may be made to Habitat for Humanity PEI and Mikinduri Children of Hope.

Share Your Memory of
Michael (Mike)
Upload Your Memory View All Memories
Be the first to upload a memory!
Share A Memory