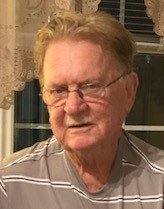 Peacefully at the Queen Elizabeth Hospital on Wednesday, April 14, 2021 the death occurred of Roger Soloman of Stratford and formerly of Souris West and Georgetown, age 81 years.

He was educated at Saint Dunstan’s University, UNB and STFX.  After serving as a Lieutenant in the Royal Canadian Navy aboard the HMCS Bonaventure, he began a long career as an educator, serving as Principal of the elementary and high schools in Souris.  In 1993 he was elected as a member of the Legislative Assembly of PEI.  He enjoyed serving on many community organizations, but was happiest at the cottage business he built on the Brudenell River, with his family close by.

Resting at Hillsboro Funeral Home, Stratford.  Due to current restrictions, a private family visitation and funeral service will be held. A live stream of the Funeral Mass on Friday at 11 am may be viewed by clicking on https://www.facebook.com/St-Benedicts-Pastoral-Unit-108927214104236. Interment will take place at the Saint James Roman Catholic Cemetery, Georgetown.

Memorial donations may be made to the St. James Roman Catholic Church Cemetery, Georgetown.

Share Your Memory of
Roger
Upload Your Memory View All Memories
Be the first to upload a memory!
Share A Memory