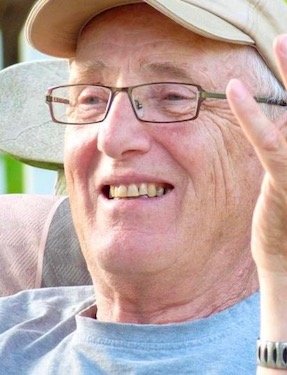 Frederick Morrison Brown was born in Winnipeg, Manitoba on July 5, 1938, to Anne and Frederick Brown. His brother Donald still lives in Winnipeg as do many other relatives. Fred and his future wife had a connection long before they ever met. Dad threw a snowball at Margaret Ann’s father’s car when he was a kid - which resulted in an exciting chase and excellent story years later when they met as young adults. They eloped and married in a small ceremony in 1965, looking like models in their photos. Over the years mom and dad made their home in many cities in Canada and sometimes the States. Fred was a consummate perfectionist as many who worked with him over the years will remember. Dad began in the restaurant business in the early 60s, with A&W and then McDonald's. He went to Hamburger University in Chicago, eventually becoming a field consultant with McDonald's Canada. The family moved every 15 months or so in those years, while Fred helped franchisees make their restaurants the best they could be. There were lots of business trips to places like Germany, Hawaii, and New Orleans, which they enjoyed immensely. He recently tried to count how many hamburgers he’d eaten in his life...it was in the thousands for sure.

Fred and Margaret Ann bought their first McDonalds in Moncton in 1979. All three of their kids, Maggie, Andrew (Natalie), and Chris (Zoe) worked at the store with their mom and dad. In 1982 they built a new McDonald's in Sussex, N.B., and truly became part of the community. Fred loved his staff at both restaurants and passed along many life lessons about hard work and doing things right - not just fast - to hundreds of young employees over the years. He was always thinking about new and better ways of doing things, both in business and in his personal life. Could something be more streamlined, more efficient, catchier, tastier? He was a man who could improve anything - even if you thought it was fine the way it was. He even shoveled snow like it was an art form. He thought any dish could be improved with chocolate, blue cheese, nuts, or barbecue sauce. Fred was a lover of many things, Margaret Ann and his family of course, but the place he always seemed happiest was outside. Whether that was in the woods, on a mountain, on a beach, or in the garden. He loved to sit and people watch, almost always with a dog by his side. Fred loved the simple things, like a cold beer on the deck after a long day in the garden, wool socks and flannel-lined pants in the winter, Margaret Ann’s homemade pies, and going to the library to get some paperbacks. Fred fostered many loves in his children and his beloved grandchildren Owen and Wil. Fred will also be missed by Wils mother Mireille. He taught them about the comfort you can get from reading, the skill and patience needed for building things like, the exhilaration and peace from being in nature, how to find the right tool for the job and the outright joy and release of a good laugh. It was almost like a contest in our family to see who could crack each other up the hardest. In his later years, many of us received e-mails from him meant to either make us laugh or somehow improve our lives. He became a pseudo grandpa to many fine young men in recent years, giving over part of his beloved garage to the kids, who named it Freddy’s. He was always there for his family and friends, a generous man who would drive you anywhere, rototill your garden or give you $20 if you needed it.

We hope that wherever Fred, Dad, Morrie, Freddy is, he is enjoying a big turkey dinner with lots of wine, flaming plum pudding, and friends and family in silly hats laughing and telling stories. He would tell us to not be sad, that he had a long and excellent life. We will miss you so much. Resting at Hillsboro Funeral Home, Stratford. A gathering to celebrate Fred's life will be held when his sons can come to PEI, we'll let everyone know. Memorial donations may be made online to the Queen Elizabeth Hospital or the PEI Humane Society.

Share Your Memory of
Frederick
Upload Your Memory View All Memories
Be the first to upload a memory!
Share A Memory