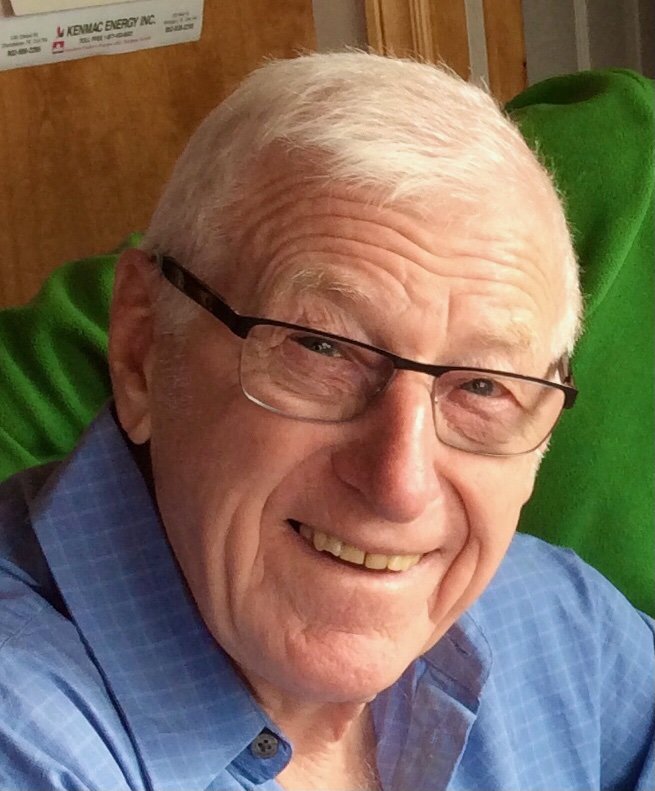 Ted was born on June 8, 1935 in Saint John, NB, to Walter Hatfield Irving Murphy and Winifred Gertrude (Cox) Murphy. He grew up in the City’s South End and graduated from Saint John Vocational School in 1953. Ted was an accomplished carpenter and woodworker, having learned these skills at an early age from his grandfather, Captain George "Danny" Murphy.

On August 8, 1964, he married Sandra Carol Marie Doucette (later Doucet), daughter of Leonard J. and Sara "Sally" (Dupuis) Doucet, in Stella Maris Catholic Church, Saint John. They were blessed with four children: Caroline Elizabeth Murphy (predeceased in infancy), Kelly Ann Galloway (Iain) and Jill Marie Murphy of Stratford, and Philip Douglas Murphy (Nicole) of Suffolk, PE. Ted was a loving, affectionate and supportive husband and father who was an exemplary role model of chivalry and marital devotion. He was San’s reliable and willing "sous chef" and her "go to person" on professional and personal matters. He loved their quiet times chatting over coffee, enjoying bacon and eggs after church, or sitting on their deck at "The Camp" overlooking the lake. Ted and Sandra celebrated fifty-five wonderful years of marriage in 2020.

Ted had no great desire to travel the world, but instead sought to create life-long memories with family and friends closer to home. He taught his children how to create backyard adventures from the tiniest notion, and that your imagination could make them magical. He showed them how to find excitement and entertainment in nature when they were feeling blue, raising their spirits by befriending two small chipmunks, naming them Chip and Dip.

In the early 1970s, he and Sandra purchased an idyllic waterfront lot on Cassidy Lake in Norton, NB. "The Camp" became an annual summer refuge for his family and allowed him to indulge his passion for nature and the outdoors. He found happiness in a multitude of simple restorative pleasures: cool dips on hot days, kaleidoscope sunsets, fishing, canoeing on a glassy lake, listening to the drumming rain on the tin roof and watching thunder and lightning storms. Always the gracious host, Ted and Sandra welcomed family, friends and other Cassidy Lakers to "R-Happy-Nest" and later, "Murphy’s Law-dge", for parties, barbecues, boisterous singsongs and campfires. Binoculars always within reach, he loved to watch nature unfold all around him. Calling to the loons, walking in the woods, gathering nuts to plant from oak and chestnut trees, or spying on the eagles, were just some of the many pastimes that captivated his attention. The passion he felt for life at the lake was infectious and inspired several other friends and family to join the Cassidy Lake community.

Ted had a long and distinguished career as a civil servant, and his relocations for work qualified  him as a true Maritimer. He was first employed with Canada Post in Saint John, and moved up the ranks after accepting a new position with the department in Halifax, NS. He eventually moved his young family to PEI in 1980 when he was offered a new opportunity with the Department of Veterans Affairs in Charlottetown. He remained with DVA until realizing his early retirement dream in 1989. Sandra continued to work for a few more years, to allow time for Ted to develop his "domestic skills".

A lover of music, Ted played many instruments and had a strong, warm voice. Throughout the 1950s, 60s and early 1970s, he played saxophone and clarinet in his brother’s band - "Doug Murphy’s Orchestra". He shared his love of music and song with his family and we carried it throughout our lives. He taught his children to create an orchestra from the natural world, whether it was percussion with the bones and spoons, whistling himself or whistles made of Alder branches for the wind section, or blades of grass blown between thumbs forming the reed section. He showed us music was everywhere, we just had to be open to the possibilities around us. In the past six years, Ted’s love of music was rejuvenated when he and Sandra joined the Saturday Morning Ukulele Group (SMUG) and the Andrews Strummers in PEI. He generously gave his time performing with SMUG at senior’s homes, community Christmas suppers, St. Patrick’s Day and many others.

Ted was an avid fly fisherman who cherished his time at Stoney Lake and Parlee Brook and many waters on PEI. He loved sharing this art with his brother-in-law and son, who kept him well supplied with his favorite fly pattern, the Brown Hackle.

Ted had an everlasting sense of humor, infectious smile, kind eyes and a joyous heart. He loved to reminisce and share stories from bygone days, and was keen to hear about the latest "goings on" in your life. A pillar of strength and support for family members, he was always willing to offer a helping hand, a shoulder to lean on, or words of advice or encouragement. In his senior years, he brought his trademark positive attitude and "can-do" spirit to dealing with serious health challenges.

In addition to his parents: Walter (1998) and Winifred (Cox) Murphy (1991), his infant daughter, Caroline Elizabeth (1965), and his brother, Walter Douglas Murphy (2013), he was predeceased by his sister-in-law, Frances Murphy (nee Legere, 2004), his father-in-law, Leonard J. Doucet, his mother-in-law, Sara (Dupuis) Doucet and his sister-in-law, Gail (Carr) Doucette.

In addition to his wife and children, Ted is survived by his loving sister, Ruthann Alice Galbraith, of Saint John, three adoring grandchildren - Angus Galloway of Kitchener, Ontario, and Caroline and Aiden Galloway, both of Stratford, PE; and his step-mother, Doris (Ferguson Moore) Murphy of Saint John. He is also survived by brothers and sisters-in-law, Douglas Doucette (Gail, nee Doiron) of Saint John, John Doucette (Odette, nee LeBlanc) of Moncton, and Darlene Doucet (Judith) of Kingston, Ontario. Ted was a dear uncle of Steve, Peter and Ellen; Glenn, Katharine, Scott, Joanne and Heather; Joel and Sara; Rick, Chris, Tanya, Derek and Danielle. He will be sadly missed by his West Royalty coffee buddies, members of the Saturday Morning Ukulele Group (SMUG) and Andrews Strummers of Stratford.

Resting at Hillsboro Funeral Home, Stratford. Due to current COVID restrictions, a private visitation and funeral service will be held. The family would appreciate memorial donations to the Alzheimer’s Society or the Canadian Cancer Society, which may be made online.

Ted’s life will be celebrated at an "invitation only" funeral service at St. Paul’s Anglican Church in Charlottetown on Monday, January 25, 2021 at 11:00 am. The service will be live streamed on St. Paul’s YouTube channel (stpaulslive.ca) and on their Facebook page (https://www.facebook.com/stpaulschurchinpei).

Share Your Memory of
George (Ted)
Upload Your Memory View All Memories
Be the first to upload a memory!
Share A Memory