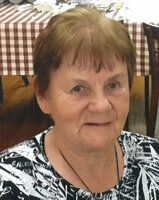 Formerly of Alberry Plains, and with family at her side, Rosemary “Rose” Charlotte Valley (nee Cain) passed away peacefully at the Dr. John Gillis Memorial Lodge on Saturday July 9, 2022, age 81.

Rose was born in Summerville, the daughter of the late Arthur and Lottie (nee Farrell) Cain.  She was predeceased by her infant daughter Dana Marie, her brothers James (Jim) Cain, William (Bill) Cain, Francis (Frank) Cain, and Harold Cain; her brother’s-in-law John VanDyke, David Walker, and Vincent Baird; and her sister-in-law Tuddy Cain.

Rose will be missed by her brother and sister-in-law Robert and Dianne Cain, her sister’s-in-law Zita Cain, Lorraine VanDyke, Kay Baird and Leah Walker.  Rose will also be missed by her many nephews and nieces, cousins, extended family members and neighbours.  Anyone dropping in for a visit to the farm in Alberry Plains would always be welcomed with a cup of tea and something that Rose had baked that day.

A public visitation will be held at the Hillsboro Funeral Home, Stratford on Wednesday from 4-7 pm. A Funeral Mass will be celebrated on Thursday at 10:30 am from St. Joachim’s Church, Vernon River. Interment in the church cemetery.

The family would like to thank Dr. Terry Magennis and staff of the Gillis Lodge for their outstanding compassionate care.  If so desired, memorial donations may be made to the Alzheimer Society of PEI or the St. Joachim’s Cemetery Fund.